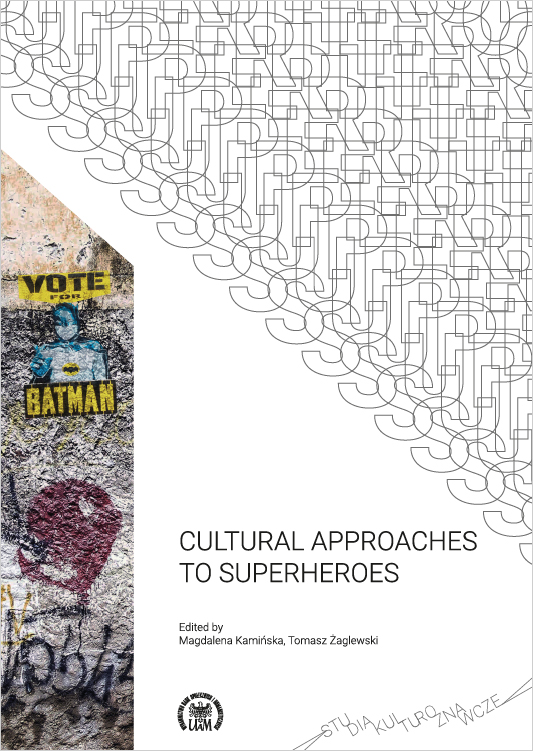 The title of this volume – Cultural Approaches to Superheroes – draws on a very specific approach to modern superhero studies which should venture beyond a textual-centered research. As Andy Medhurst suggests in the Introduction to The Superhero Symbol: Media, Culture and Politics, to view these fantastic, unrealistic figures less as mere entertainment icons and more as a „cultural thermometer, taking the temperature of the times.” Certainly, since the very beginning of the modern “superhero culture” the colourful titans in spandex (as presented in comics, cinematic features, TV series or video games) have existed within two codes of reception – as Umberto Eco proposed–being simplistic and aesthetically universal vehicles of stories and hidden manifests of changing times, shifting from “champions of the people” feared by modernism to highly relevant metaphors of cultural, racial or sexual minorities in the guise of orphaned vigilantes, alien refugees or mutated
outcasts. (…)

This volume work contains five chapters that address the aspect of “usefulness” by following distinct paths to uncover the role of superheroes in shaping modern discourses and critical readings.

Liam Burke, We need another hero: the incompatibility of superheroes and Australia

Jakub Wieczorek, The usual super-suspects: mundanity of the contemporary supervillains
in Marvel Comics

Michał Wolski, Chronotope of redemption? The model of superhero narrative
in the Thunderbolts comic series

Michał Siromski, Supertherapy. Analysis of the therapeutic and psychoeducational potential of the superhero stories